[et_pb_section admin_label=”section”]
[et_pb_row admin_label=”row”]
[et_pb_column type=”4_4″]
[et_pb_text admin_label=”Text”]
Jim Corbett was a pioneer in wildlife education and conservation. Long before anyone could foresee the dreadful impact industrialization would have on modern and free INDIA, this man had started spreading awareness about the importance of wildlife and its need for conservation.

With the death of Jim Corbett we have definitely lost a vast treasure of knowledge.  The sort of knowledge the modern day re-searcher can only dream of having. The great man not only knew the flora and fauna of his surroundings but could also talk their language. He could predict the movement of Tigers and Leopards as if predicting the movements of his own kin. He was able to imitate the calls of most of the birds of Kumaon Region and knew almost everything about their habits and habitat. His knowledge of the Birds, Bees, Insects, and Reptiles was impeccable and I can’t think of anyone who learnt so much from Mother Nature.

Jim Corbett’s last and most important gift to his country was the formation of a Reserve in the Ramganga River Valley where all hunting was strictly prohibited.  The Reserve was named as Hailey National Park, after Sir Malcolm Hailey, the then Governor of United Provinces. It was with Hailey that Corbett formed this Reserve and later on the Indian government changed its name to Jim Corbett NationalPark.

Which brings us to the beautiful place itself. Nestled in Himalayan foothills with the Ramganga River flowing through its very heart, this place evokes emotions that hitherto you would feel incapable of expressing. Many a poets and writers have been at a loss of words after visiting this place.

The lush green Terai grassland which extend for miles before meeting the foothills of the mountains, the grass gently swaying in the breeze, spotted deer congregating in a small patch of this vast grassland enjoying an afternoon siesta, a lone wild boar foraging for food,eagles circling the skies above your head, it is a picture of absolute tranquility.

You see a couple of Pallas fishing eagles sitting on a dry stump of tree, a lone grey headed fishing eagle sitting high on top of a Sal tree overlooking the proceedings below. 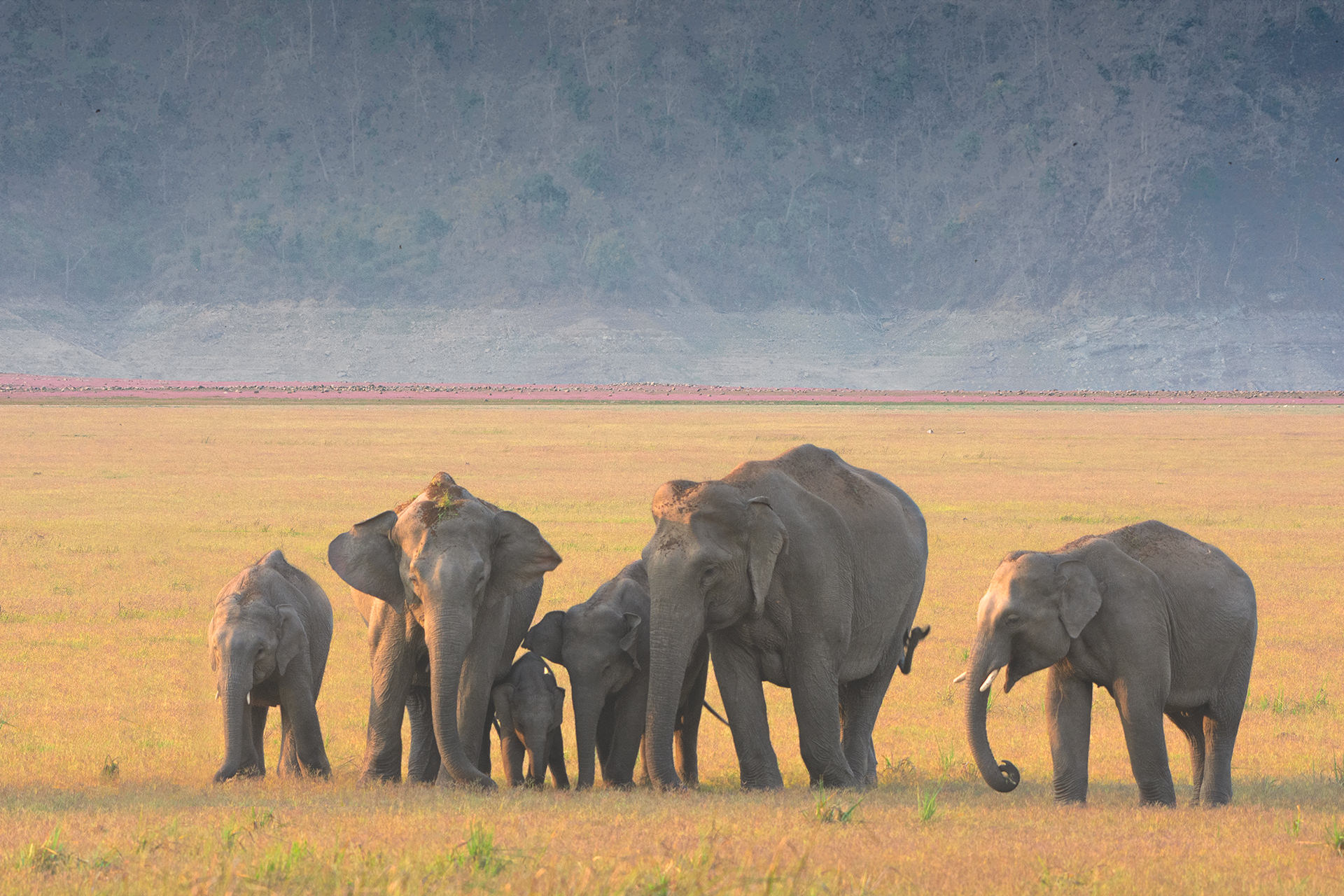 Few Himalayan griffons joined by a Red Headed vulture are sitting on the rocks adjoining the banks of the River. These ghastly looking birds serve a very important in maintaining the environment of the forest healthy and clean. They devour decaying carcasses thus reducing the danger of outbreak of diseases. 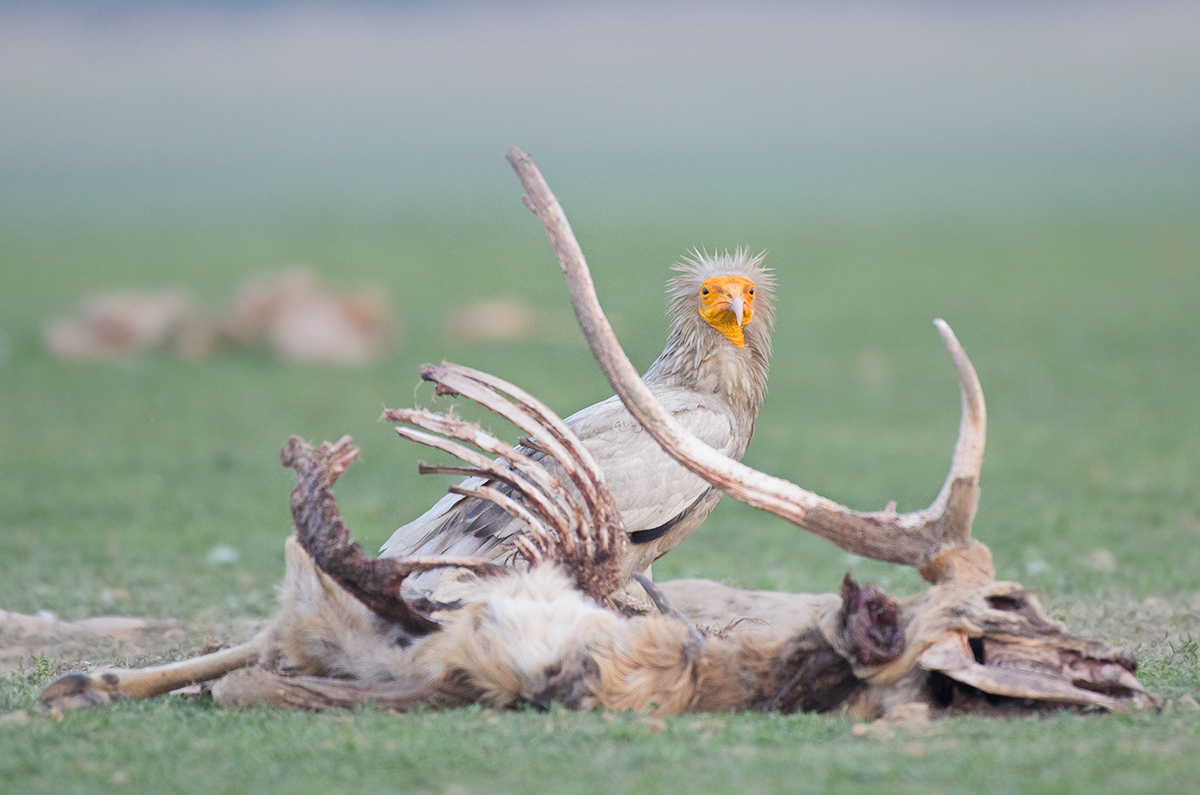 Suddenly you hear a loud trumpet coming from the patch of forest near the foothills of the mountain. The trees which stood staunchly are being shaken vigorously by an unseen force.  You hear it again. More loudly this time, a shrill trumpet, a warning. You brace yourself to see a pachyderm come charging out of the forest.

But then again if things were to be so predictable, this place won’t be a called a forest. A small little gentle giant peeks from behind a tree, sniffing the air with its trunk. This is his first visit to the banks of the river and instinct drives it to check for any sign of danger. Enthusiastic, curious yet cautious this baby elephant is as amazed at this beautiful sight as you. He takes a few gingerly steps forward and looks back towards the trees. Following closely is another elephant, trying to keep up with the enthusiastic little one. Trumpeting again this time she manages to catch up with the youngster and with a sharp nudge of her trunk she nestles him between her legs.

Herds of elephants congregate on the banks of the Ramganga River during the dry season.  Guided by the knowledge passed on from generation to generation they undertake a local migration from various other parts of the region to come to the shores of this river.

The grasslands is a great place to observe elephants in Corbett. You can see them enjoying themselves bathing in the water, splashing the water about, young calves running and playing around, few elephants taking a dust bath. The sub-adults like to indulge in a playful fight honing their skills. 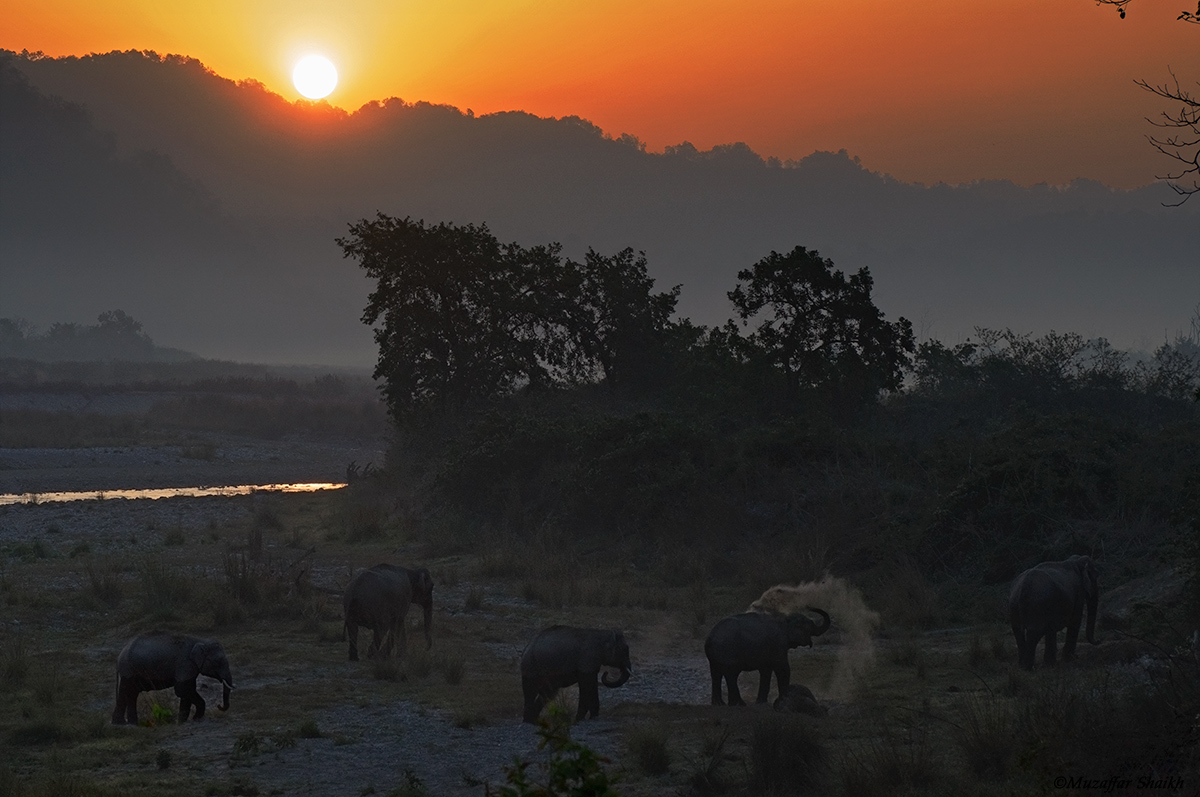 A tusker makes an appearance leisurely chewing the grass and taking giant strides towards the water, his huge tusks gleaming in the evening sun.

Corbett is one place where you can hear both the trumpets of the elephants and the roar of the tiger at the same time. There are many instance where you can see a tiger passing through the forest with the herd of elephants keeping a close eye on its movement, both the titans giving one other equal respect.

Catching a glimpse of tiger in Corbett is extremely difficult, requires lot of patience and extensive knowledge of the forest. There is still a lot of things for me to learn about forest and its denizens but fortunately my driver and guide are well versed in its language. And it was their knowledge and observation that helped me in having a fine rendezvous with the queen of the Bijrani. 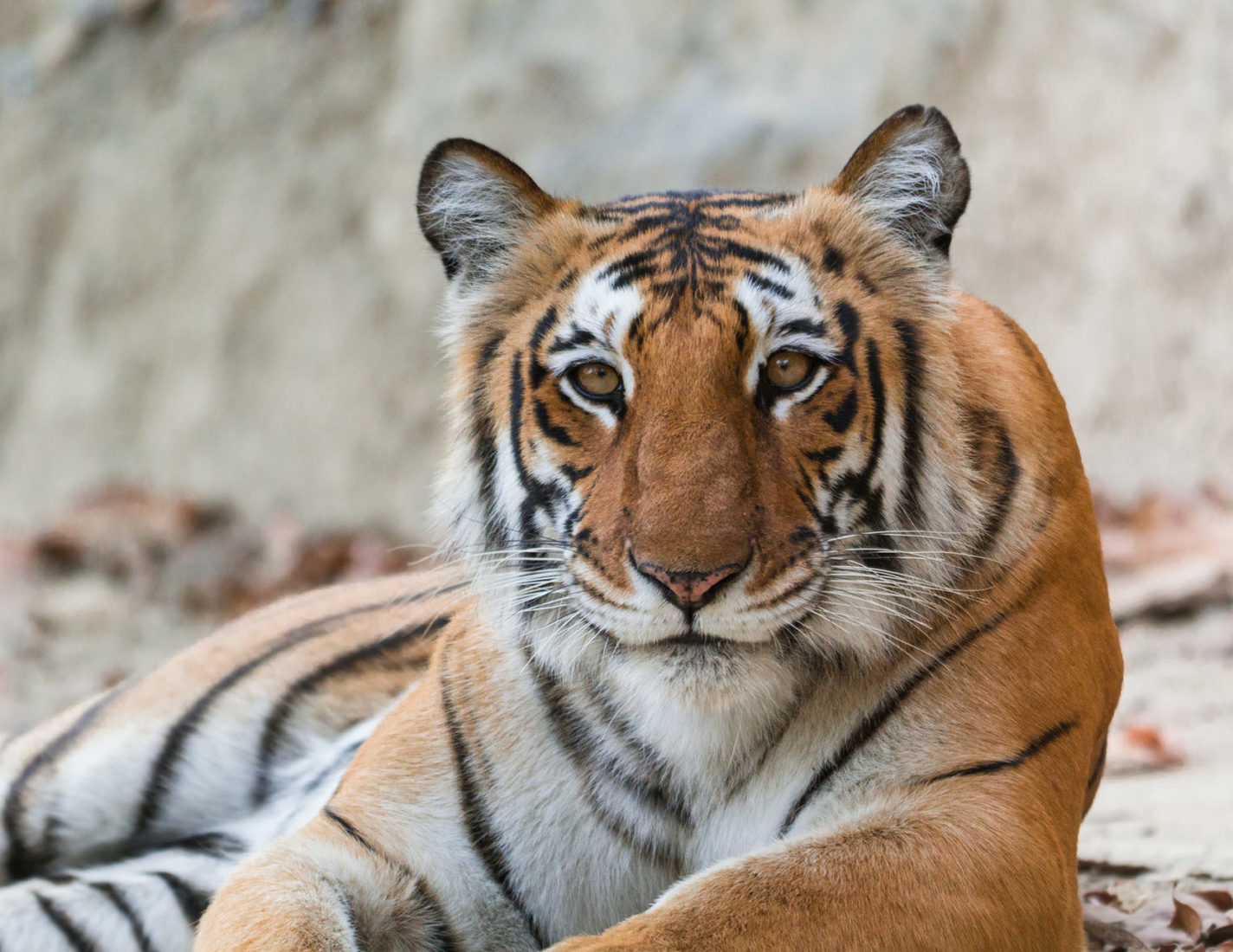 It was a time when the entire floor of the forest was carpeted with the Sal leaves giving it a wonderful appearance. Summer was just around the corner but the evenings still had a crisp chilly feel to them. We had spent a good part of that evening observing elephants in the dry river bed when it was decided that we should move on and look for something else.  NowI never go to jungles expecting to see tigers, so when my guide said, lets’ look for something else, I expected eagles, owls, vultures, some other birds or other mammals.

We were winding down a rough and stony track when we saw a group of 4 people excitedly waving at us. A tigress had just crossed the road in front of them. She had come from the grassland on the right hand side and moved into the nullah on the left.  On our left were two small hillocks converging together to form a nullah and at the far end of this nullah, near the base of one of those hillocks was a small water body. Right besides this water body a game trail went up one of those hillocks. The entire area was covered by Sal trees and from where we were standing the water body was not visible nor was the path leading up towards the hill.

The guide in the other gypsy proclaimed that she is going to go towards the water, quench her thirst and cross the road the again to go into the grassland. We decided to wait for her.  Now, if you have been into jungles you would know that the fun in tiger sighting is in tracking it, either by following its movement by the calls of other mammals or tracking it by following its pug marks.  The place where we were waiting had no pugmarks as she had crossed the road, there were no pugmarks leading into the forest as the floor was covered with dry Sal leaves and there were no alarm calls as well.  We waited patiently for 20 mins for any sign of movement.  Softly in a hushed voice my driver said, “Sir, wohnahiaayegiyahan se, wohupar hi niklegi, mujhepatahai”. (Sir, she won’t come back from here, she is going to the top, I am sure of that).   “Hum chaltehaiupar, who ussikachchiraste se uparaayegi” (Lets go up, she will come by that game trail).  “As you say so “, I said.

Leaving the other gypsy with its bewildered occupants behind, we started off on another bumpy road going up the other hillock. I still distinctly remember the expression of their faces which clearly said “what in the world are you doing leaving a tiger behind?”

Just as we were tackling a bend on that steep uphill road a sambar bellied in the nullah below. “Sir, wohupar hi aarihai, aageinklegi”, my guide said. (Sir she is coming up, she will come out in the clearing ahead). We completed the steep turn and waited patiently for the tigress to make an appearance.  We were on a dirt road bounded by a face of the hill on our right and a small valley on the left. There were Sal trees all around us with bushes growing up to 2 feet at the base of these trees.  The game trail leading from water body opened up on the road we were standing, on our right hand side with its opening covered up by these bushes.

Suddenly those bushes parted and out stepped the tigress striding magnificently in the middle of the road.  In her prime, with a glittering dark yellowish orange coat she looked at us inquisitively and started walking on the road. Her shoulder muscles and her size in general proved that she was one strong tigress, her every step was filled confidence and pride. Seeing a tiger walk towards you in any situation is exciting and gripping, but seeing a tiger walk towards you in the beautiful setting of the Corbett park is a different experience altogether.  With the dry sal leaves littered on the path, the rays of a setting sun penetrating the trees around, a dry road and a tiger walking towards you. What more can a photographer want?

We spent the most memorable hour I could have asked for in that Jungle.  And this was all possible because of the knowledge and the intuition of my driver/guide.

Apart from these two giants of the forest, Corbett has lot of other things to offer. If you are really blessed, you can see the leopard here. Leopards are quite a few in number here, but due to the presence of their elder sibling they are completely nocturnal. You have to be really lucky to spot one during the day time.

Yellow throated pine martins are quite common here. Hog deers, barking deers, sambar, wild boar, jungle cat, sloth bears, and Himalayan Black Bears can also be seen here. You can also see the leopard cat and the fishing cat here. Otters can be seen hunting for fish in the river. Gharials, a long snouted fish eating crocodile is usually seen on the banks of the river sunning themselves. The indian rock python and the king cobra are two of the major reptilian species found in this forest.

Winter season is the best time to observe the birds as there are lot of migratory birds which visit this forest.

Contact Us
PrevPreviousNitin Desai – Honorary Contributor, Nemophilist
Next5 Reasons to travel with NemophilistNext